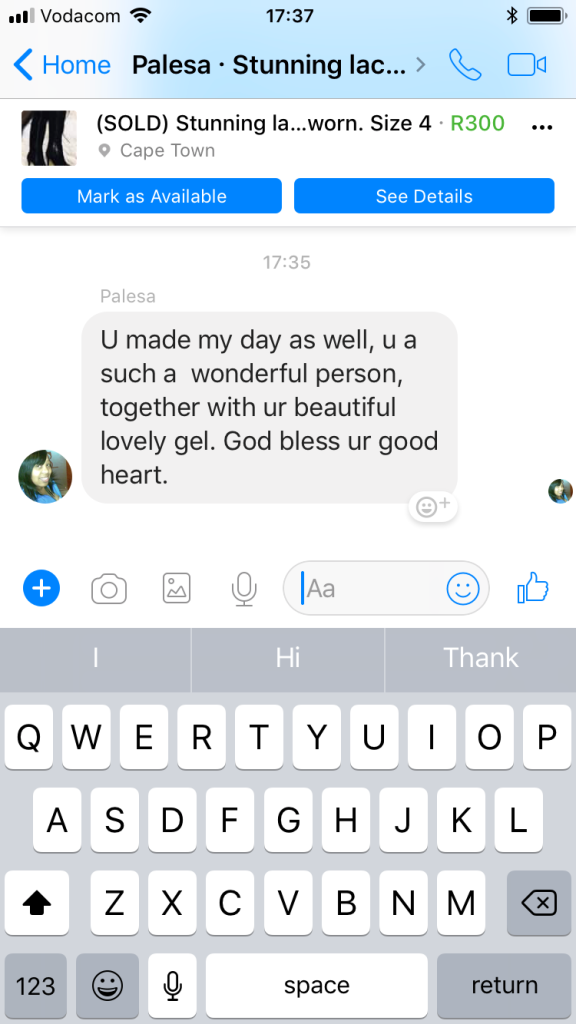 Like most white people born and raised in South Africa in the seventies and eighties, the only interactions I have with people of colour are in supermarkets, Ubers and on Facebook Marketplace (where, lately, I find myself spending unjustifiable amounts of time browsing for items of footwear I do not need nor have the space to store. But, girls and shoes being a thing that defies logic and explanation, we must accept what we are and get on with it).

And the interactions I have in these spaces are sometimes dull and pedestrian, and sometimes, for a while at least, make me think about the world we live in and the thoughts we have about the people who populate it. For a while I’ve had a pair of thigh-high, lace-up boots bought on a whim and which have always been that level of tight that only stops hurting after a bottle of Chardonnay and several tequilas. And since I am now old as a stick and not inclined to anaesthetise myself with the same gay abandon as I did in my youth, it made sense on several levels to sell them.

So, for the first time, I placed my own ad on Facebook Marketplace and waited to see what would happen. What happened initially was nothing, and I wondered if I had marked them too high. But then Friday 5pm rolled around and while people crawled home in rush hour traffic and commuters trawled shopping sites to pass the time, my phone started pinging with women urgently needing a pair of thigh-high, lace-up hooker boots. A notion I fully understand. By Saturday morning I had several eager buyers, indicating that I sold them far too cheaply and am utterly useless as a businesswoman.

Come Sunday morning my phone was still pinging and I was copying and pasting the same message to scores of hopeful shoe lovers scattered around the city. Then a message came through from someone called Palesa. It was riddled with typos, and all my prejudices kicked in. Because she wasn’t white and living in Claremont and because she wrote ‘ur’ for ‘your’ and because I was sick of copying and pasting I almost didn’t bother to respond. But then manners got the better of me. In seven seconds I got a message back from her requesting my phone number.

Now I felt a twinge of annoyance. Not only was Palesa making me write things, but I had to also say things with my voice. I sent it anyway. Seven seconds later, my phone rang and Palesa – with such excitement her words tumbled over each other – was telling me how she was hopping in the shower that very second and then making her husband drive her from Goodwood to Green Point so she could purchase the hooker boots which were going to make life worth living. She would be there in under an hour and I was not to leave my house nor dare sell them to anyone else.

My husband, on his way out the door to the airport, warned me about letting her inside. I rolled my eyes at his paranoia, but his comment made me secretly nervous. Because, you know, you never know. At exactly the alloted time, a little green car with a number plate that said PALESA and driven by an exasperated-looking husband type of person pulled up outside my house. She bounced out the car, bounded up my steps and started praying in a loud voice that the boots would fit. It took a bit of pulling and tugging, but she got them on. ‘Thank you, Lord Jesus!’ she announced to the heavens, and embraced me in a tight hug. ‘You are wonderful! Thank you, God bless you!’ she called out to me as she clambered back into the small, green Palesamobile and, waving and blowing kisses, disappeared from sight.

I stayed where I was on the steps of my big house in a good area, all bolted up and enclosed in expensive Victorian-style railings custom made to keep people out and felt a twinge of sadness. About how small and uncontested my world is. About the way I think about people who are different. About how many kind, warm, generous humans exist that I will never have the joy of knowing. It’s weird how we live. In many ways, nothing down here has changed. Now that the apartness is socio-economic it is no less insidious.

I wish I had the courage to message Palesa and invite her around for dinner. I know our husbands would have loads in common, and I know for certain she would be somebody who would brighten up my day beyond measure. But I won’t because one doesn’t, and eventually I will forget about her and our heart-warming interaction. That evening I got a message thanking me again, and the next day a third message with a photograph of her standing in her office, smiling from here to heaven, rocking those sexy boots.