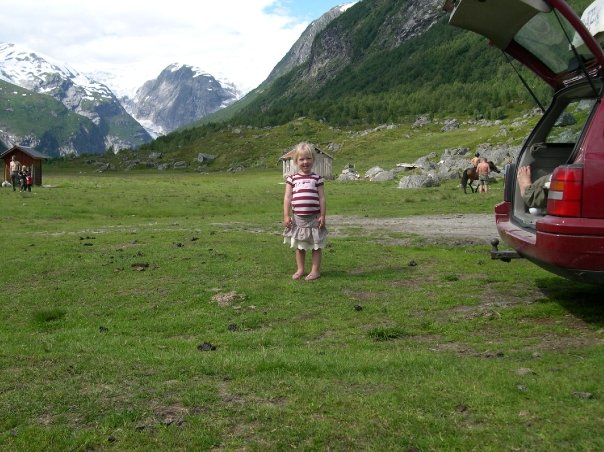 Who – as in, WHO – puts a two-year-old and a newborn baby with a personality disorder into the back of a station-wagon and drives across northern Europe in horizontal rain? And how could this scenario ever, possibly, end well? In my defence, I was newly post-partum and I think hormones and the searing pain of mangled nipples (and mangled other bits) were clouding my judgement to the point that when I saw the photograph of the house on the fjord, all awash with sunlight (they must have taken the pic on the single rain-free day that year) with snow-capped mountains in the background and the water an astonishing aquamarine I did not think, ‘hang on – this house in the mountains would be a very nice vacation spot for two adults who like to read, relax and take walks, but since we now have these dreadfully noisy and demanding young children, no way, José’ – no, I did not. I thought, hell – how bad can it be? Well.

While we knew the distance in kilometers from Malmö, south of Sweden, to the village of Sogndal in Norway, what we didn’t know is that Norwegian roads are roughly four metres in diameter, and that July is the month when all the Germans of the world decide to rent camper-wagons and go and purvey the fjords. So, while we should have arrived at our destination relatively quickly, instead we crawled along, unable to overtake, while the smaller of the dictators screamed blue murder pretty much non-stop. It was a long journey, to say the least. Our only respite came on the ferry when – please understand that these were the days before Madeleine McCann – we locked her in the cabin, asleep (okay, screaming, but eventually she’d wear herself out and nod off) and enjoyed a very nice fish buffet with an ocean view.


<
The house on the Sognefjord was every bit as beautiful as the picture promised. One doesn’t say this lightly when one has grown up in Cape Town, but Norway is off-the-charts gorgeous, with its alpine-looking mountains towering over lakes the colour of a Caribbean ocean. But, it must be said, there is the issue of the weather. We stayed for a month while my husband did a locum for a chiropractor couple who’d gone to the States to have their baby, and it was the longest month of my life. Because there is only about half an hour of darkness a night, nobody slept. And in the day, when you needed to be awake to deal with the demands of two bored, cranky babies, a constant, grey drizzle made you want to do nothing but go back to bed forever.

I can write about this with humour now, but honestly, I don’t remember feeling more desperate and suicidal in all my life. Since the house was (literally) on top of a mountain, putting the smaller and more tyrannical of our children into a pram so that she’d be appeased for 30 minutes was tricky. We spent more hours than I care to remember walking up and down this mountain in a perpetual drizzle while I, in a high-pitched Mary Poppins-voice (bordering on hysteria), pointed out ‘interesting’ flowers and insects to my soggy two-year-old who was trying her best, under difficult circumstances, to keep a stiff upper lip. There were times that ‘holiday’ that I lost it, and even writing this, the memory brings tears of shame to my eyes. Sometimes I yelled at the two-year-old when it was the other one who deserved my wrath. I was just so fucking tired. And fat. And miserable. Per went off every day to work in Norwegian (not easy) and tried his best to be with us, but somebody had to bring in the dosh. The days dragged, and every afternoon I sat by the window, Carly Simon on repeat, waiting to see the car turn the corner so that he would be with me and life would feel manageable again.


<
And there were fun times, too. My mom and dad-in-law drove up from Denmark, and they took the girls for walks and gave me a few moments to gather myself (though even saintly grandma’s patience was tried by the child who refused to shut up for five seconds). For my birthday we boiled king crab and Per made me the best seafood platter I’ve ever eaten in my life. We took road trips on the weekends and were astonished by how every corner we turned revealed landscape more scenic than the last. And we survived with our sanity and our family intact. Now, we look at those pictures and laugh and shake our heads and say, what the fuck were we thinking? But, it’s a holiday we’ll never forget.

9 thoughts on “The worst holiday of my life – with pictures”