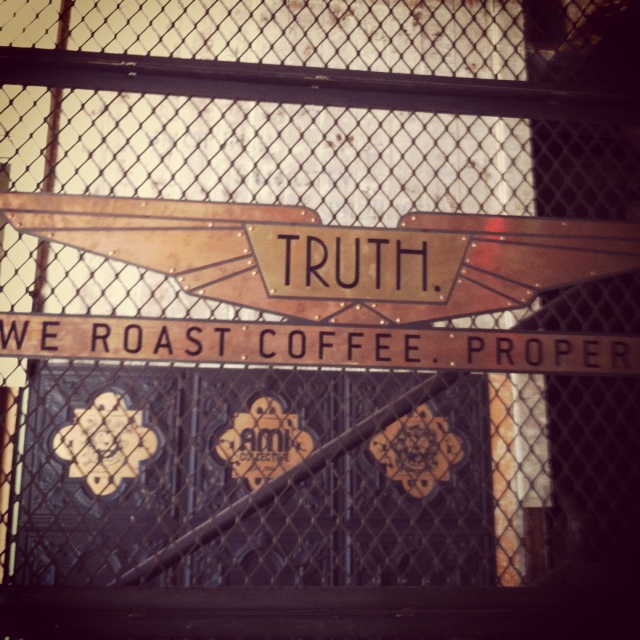 When you’re told a coffee shop is the best coffee shop in the world and that coffee shop is not in New York or Berlin or Copenhagen but in Buitenkant Street, Cape Town, it’s normal to be a bit sceptical and to think it got that vote because they feel a bit sorry for us with our accents, but I have to say, I’ve been to coffee shops in all of those places and Truth kicks every one of their butts. It’s freaking amazing, and even though I had on my best H&M and blow dried hair I felt decidedly uncool amongst the Afros and metal and sleek, industrial finishings. The menu is as modern and chic as the interior, with things like wild mushrooms and thyme on toast with a perfectly poached egg, English breakfast with hollandaise sauce (because that sauce should actually be served with everything) and what I ordered, the organic three egg omelette with herbs and mascarpone cheese which was delicious. And the service is friendly and the people who wander in and out are interesting to look at, so if you live in Cape Town and haven’t been there, go. It’s really awesome.

The reason I chose that venue that morning is because truth has been on my mind. A while back I hosted a meeting of my discussion group, The Dialogue Thing, and as I sat there in my courtyard while the south-easter died down and a sickle moon appeared over the rooftops, listening to black and white women talk about their lives and their experiences of race and identity I felt gratitude for another opportunity to listen and talk and be heard and – for the love of God – to be acknowledging the big, fat elephant in the room called ‘race’. Because these spaces don’t present themselves in normal life. Instead, we all fok maar voort, in a mass disacknowledgement of our history and our past, and we pretend it’s not an issue anymore because 20 years have gone by, but it is an issue. It is. You can’t have lived like that for so many years – in segregated schools, on whites-only beaches, our minds warped by the twisted ideologies of our elders – and emerge unscathed and go on like nothing ever happened.

And I’m white and middle class so I can only speak from a white, middle class perspective, but if it’s hard for me sometimes to relate to black South Africans I can’t even imagine what it feels like for a black woman born in the same year I was and who was denied basically every human right and freedom I took for granted to suddenly be in white spaces and have to be cool about it and fit in and accept us as kin. I mean, it was crazy, the way we lived. Yet, somehow these conversations don’t happen. We’re expected to move forward, en masse, and worse – we’re warned not to bring up ‘the past’ because people get uncomfortable and it makes for awkward dinner party conversations. And what’s so amazing about this group of women is that they march head first into the awkward and talk about really difficult subjects. And they welcome the discomfort because they know it’s the only way we’re going to get to the other side of this thing and relate to one another as normal human beings.

And the stories that come up are always incredible. A statuesque, admirably stylishly woman who works in media told the story of her wedding, and how she had the biggest fight with her mom and aunt at the airport because their ID documents still contained their English names, Victoria and Elizabeth – the names they were given in their youth because their Xhosa names were too difficult for the white people to pronounce. And because they hadn’t changed them, their tickets were booked under the wrong names which caused a problem for airport staff. Another woman whose mom is white and British and whose dad is black and Zimbabwean told us about how she went to the bank a while back and had to endure the humiliation of the Xhosa staff chuckling and calling their friends and passing her ID book around because while she is pale-skinned and has European features, her name is a traditional Ndebele one. As she lives in Cape Town she is constantly mistaken for a Cape Coloured, though she is Zimbabwean born and bred, and is regularly told off for not speaking Afrikaans. And this is how she lives, and the kind of nonsense she has to endure on a daily basis.

Because, given our history, it’s incredibly important to us knowing what everyone’s race is. It’s how we grew up and it defined, in the most basic sense, how comfortable or crap our lives were going to be, and it’s an ingrained thing which affects all of us South Africans, irrespective of where we come from. The woman in media recounted an incident where she assumed the person she was speaking to was Xhosa like her but then they spoke with an Afrikaans accent, and how much that confused her, and she was thinking, ‘are you black? Are you coloured? What are you? I need to know!’ Because when we know we can pigeonhole people, but the impact this categorizing has and the damage it continues to do cannot be overemphasized. And she talked about how hard it is being given a good job and always having to worry about whether she was chosen on the basis of her skin colour, and how she works extra hard for fear of letting herself and her people down. And how, being the first ones of their generation to get a tertiary education, the weight of the responsibility and what their families sacrificed and now expect of them gets so cumbersome they can hardly function at times.

And then we white girls were asked about our experience of being white, and it’s not something one is often asked about because (with good reason) nobody really cares, but it was very liberating to be able to admit how tricky I find my relationships with black South Africans and how, no matter who the person is and how much we have in common I’m constantly monitoring what I say and second-guessing what she says and interpreting everything politically and furtively hoping I’m not saying anything stupid or offensive because, god knows, I have done in the past. And I hate it, and I want to not do that anymore. I want things to feel natural and good, but they don’t. And I think the only way to get beyond (if we ever even can) it is to talk our way through it. We have to keep talking and listening and having ourselves reflected back at us because we still operate from positions of great privilege and, frankly, ignorance, and we don’t even realise, I think, how much space we white folk still take up.

And it’s not about harping on the past, it’s about getting it. Getting where we’ve been, where we are now and how we can really move on instead of just pretending we have. My beautiful and deeply insightful psychologist friend drew a great analogy as the evening drew to an end. She said, it’s like having grown up with very abusive parents who have now gone away and left us to fend for ourselves and we’re expected to just get over it and act like nothing ever happened. And it’s not about laying blame because that’s counter-productive and you give your power away when you assume the victim role. Conversely, it’s about taking our power back by taking cognizance of the hectic stuff we’ve lived through in this country, and truly acknowledging it and how much scar tissue we all still carry around.

And there are no immediate solutions, and maybe things will be different in generations to come. And sometimes they’re different now. On the school run yesterday I drove past a bus stop and there was a real old school Afrikaans farmer, dressed in khaki from head to toe, with a boep and a felt hat, in animated conversation with a middle-aged black woman in heels and long, orange braids, and to anyone not from here this would be, so what? But for me, it was the little reminder I needed that, in small but significant ways, we have become a different nation. Still mad, still schizophrenic, still trying to find its feet, but also embracing new ways and discovering new truths. And this – our ability to learn and change – is what will matter in the end.