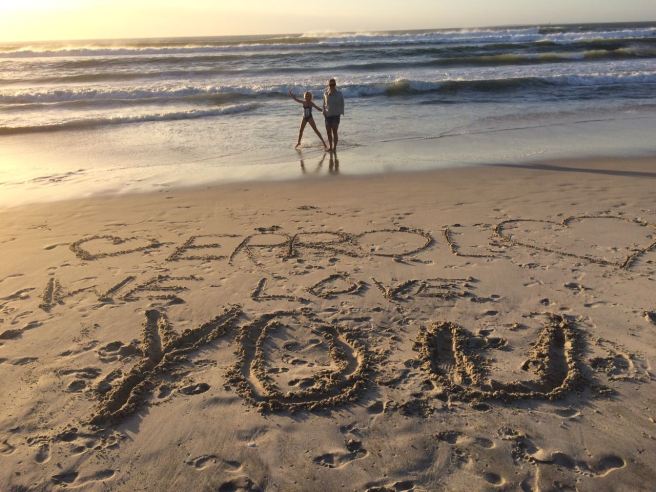 Even dads. With clear eyes and strong voices saying lucid, dad-like things. In retrospect, what’s really crazy is that we didn’t see it. Or saw it but refused to believe it. In truth, my dad had been dying for a long time, his chronic arteriosclerosis making walking increasingly difficult as the years went by. We saw him grow pale. We watched him get tired and lose interest in food and TV and just about everything, but he was my dad and therefore immortal. The power of denial is immense. Even when he told us, a few days before he passed, about the white feather that landed out of nowhere at his feet, we refused to listen to what he was saying and accept the inevitable – that he was old and sick and his body was finished. And because we pretend to ourselves and each other that we’re all going to live forever, when that doesn’t happen it comes as quite a shock. And I realise, as I speak to people around me, that making it all the way to 45 without having suffered a big loss makes me pretty lucky. Because people die all the time, every day, every minute. So we must love our people a lot.

2. There is No Such Thing as Death

I always kind of knew this, but the ways in which my dad has made his presence known to us and how, in the early days, he never left my mom’s side have banished my last remaining doubt, and my feeling around this whole issue is that it takes a very determined type of closed-mindedness to believe that what we see in front of us – this table, that cup of coffee – is all there is. It’s not my job to preach or judge or to convert anybody, but I can say emphatically that when people leave their bodies they do not cease to be. You hear this time and again, and I’ll say it once more for emphasis. When you look at the deceased body of a loved one it is not them you’re seeing. It might have been his face and his feet and his familiar white beard, but the body lying lifeless on that hospital bed was not Errol Hayden. The spark, the energy, the individuality that makes up the human spirit had left. This was the vessel that had housed his soul during his 77 years on earth and now it was empty and ready to be disposed of. Without question my dad was in that room that day, but he was standing beside us with his arms around us.

3. Grief is a Lonely Journey

I understood, in those first weeks, why couples who lose a child often end up divorcing. You would think grief, especially shared, would be a unifying experience which ultimately cements your bond. In reality, it is a road you walk alone. The path is different for everyone, and maybe this is why it’s impossible to explain what you’re going through and truly share it with the people who love you. Sometimes you get impatient with their well-intentioned probing. Sometimes you can’t believe the level of insensitivity. But it’s not their fault; they aren’t mind-readers. At times I would be fine and making spaghetti and then, out of nowhere, I’d be hit with the reality that I no longer had a dad and barely managing to hold it together and my husband would choose that exact second to ask if we had ice. And I’d want to say, DO YOU UNDERSTAND HOW FEW FUCKS I GIVE ABOUT ICE AT THIS MOMENT IN TIME? Instead I would just cry and he’d apologise and put his arms around me and I’d apologise back and that’s the nature of this beast. For a while living is profoundly kak and nothing can make it better.

My parents are (and I speak in the present tense because my dad is more alive and well than he’s been in years) deeply spiritual but not religious people, so the idea of having a funeral in a strange church and someone who didn’t know my dad talking about him felt wrong. So we opted for cremation and a memorial of some sort. The cremation has happened but the memorial hasn’t, and I don’t really know why. Maybe we just aren’t ready. But I was made aware of the fact that having no ritual for death makes things difficult. You simply don’t know what to do, and no-one else does, either. In despair, I googled rituals of mourning in Judaism. I’ve always had Jewish envy, but now it’s really a thing. They have such beautiful, humane guidelines about what to do during this time. It’s discouraged for the mourner to leave his or her house, for example. Loved ones and members of the community are welcome to visit, but it is stressed that the mourner cannot be expected to play host and it is unthinkable that they would go out into the world and behave like nothing has happened. People bring food, they enter and leave the house quietly and pay their respects in the gentlest, most practical way possible. I found – other than a handful of dear friends who did everything right – I was having to make people feel better about my loss. I was expected to ‘get on’ with things long before I was ready. I’m still not ready. We are all different, but for me – and this holds true 6 weeks later – I want to be left alone. Don’t call me, don’t try to make arrangements, don’t ask me why I haven’t answered your messages. Just leave me under my rock.

It is early days, but I think I can say with certainty that I’ll never ‘get over’ my dad’s death. For the rest of my life I will hear songs, taste food, see things that remind me of him and feel the deepest sadness that I’ll never see his face, hear his voice or feel his hugs again in the way one does with the humans of this earth. I know we’ll be together at some point down the line but it will be in a long time and in a different way. For now, I must adapt to the strange, new reality of not having a father. I don’t have a choice. I worry that my mom will be okay, alone for the first time in 54 years. I worry about what I’ll do when I lose her, too. I regret that I didn’t have a chance to say goodbye to him in words. It all happened so quickly. We thought we’d be bringing him home to watch the cricket. I thought I’d have lots of time to say what I needed to say – that nothing in the past matters, that he was a wonderful man, that I felt his love even when he didn’t know how to show it to me. A while back I said all of these things to my friend Emily and she answered with four simple words that have brought me great comfort: he knew your heart. He did. Bye for now, Dad.