The singlemost surprising thing to happen to me in this lifetime was to become Dane-ish. Who knew that the blonde guy at the party I bounced a cigarette with in the nineties (it was the nineties, okay, everyone smoked) and drunkenly handed my business card and panicked when he called the next day because I kind of had a boyfriend, oops was going to become the dude. You just never know where this life journey is going to take you so always wear good broeks and waterproof mascara just in case.

The Danes are generally an understated bunch. They hate clutter, self-aggrandisement and anything over-the-top, but the one time all this modesty and minimalism go to hell in a hand-basket is when they sit down to lunch. Not any lunch, an occasion lunch – a birthday, Easter, a confirmation (yes, this nation of atheists become pretty religious when somebody’s child turns 13). When it’s an occasion lunch, it’s balls-to-the-wall. They make up for all that healthy eating and biking big time. Before I learnt to take small portions, even greedy guts me found herself in a bit of a dilemma being stuffed to capacity by the fourth course. I was never foolish enough to make that mistake again. If you sit down at 12pm it’s quite common to still be sipping strong coffee and nibbling home-made chocolates at 8. You’ll have had every kind of fish and meat dish this nation created including smoked eel, hot liver pate with bacon and mushrooms, roast pork with crackling, chicken and asparagus tartlets and salmon and herring prepared a dozen different ways. Eaten on bread, by the way, with a knife and fork. A Danish smorgasbord is a thing of rare beauty. Everyone should sit down to one at least one time in their lives.

We drink schnapps when we’ve had two bottles of white wine and the DJ is playing eVoid and several hours ago already you lost all sense of reason. The Danes drink schnapps because it’s lunch time, because it’s cold, because it’s on the table in a variety of interesting flavours. Before you start pooh poohing a schnapps moment (cover your ears, vegans) you need to try a shot of ice-cold traditional Akvavit with a slice of nutty, freshly-baked rye bread smeared with a bit of pork fat including the crispy bits (wait, wait, bear with me) topped with herring in a creamy mustard sauce covered with thinly sliced red onions and a hard-boiled egg. Okay, sexy as I try to write it it still sounds grim, but I promise you – wash this lot down with a shot of fresh, herby schnapps and an ice-cold Danish beer and you’re up there with the angels.

Because what for kakois is that idea, anyway? Sorry, but this is a thing of mine. They just get under my skin, these stubborn vestiges of the patriarchy that stick around like gazonkelnuts because it’s always been that way. How about saying no to that ridiculous norm? How about creating a new way where you’re equals in the partnership? How about he takes your name? That’s how it works there. If you’re a woman and you have a better name than your male partner he takes yours. It’s all very simple and uncontested and makes perfect sense to me. So, you women becoming Somebody Poggenpoel? Please stop it already.

I’m really not advocating smoking, I’m actually very anti-smoking (since I stopped smoking in the nineties when I was very pro-smoking) and the Danes smoke too much, true story. But it fills my heart with joy to descend the stone staircase of my favourite restaurant in Copenhagen which is built into a cellar dating back practically to the Viking days and sitting beside a roaring fire and watching two old ducks at the next table dressed in fur coats and looking fabulous drinking enormous vats of beer and puffing on cherry tobacco pipes. It says something about the way gender plays out in that place. You’ll be hard-pressed to find a submissive woman in Denmark; it’s just not the way they are raised. They don’t give a fuck. Which leads me to my next point.

The Women are Woes

Danish woman are not wallflowers. They go naked if they want to, they have sex when and with whom they want to and they’ll tell you quite quickly where to get off if you start with your chauvinism rubbish. Here, there is no hierarchy of the genders. Both partners work. In many households the woman is the breadwinner. Not only that but she cleans her own house, does her own washing, makes her own liver pate and bakes her own bread. Then she’ll get on her bicycle and collect her children from school (there’ll be a little trailer attached to accommodate them all. Most have around seven), cycle home in sleet and order everyone around like a sergeant major. Danish men are terrified of Danish women, and for good reason. They’re beautiful, tough as nails and scary as shit.

The Summer (when it comes) is Spectacular 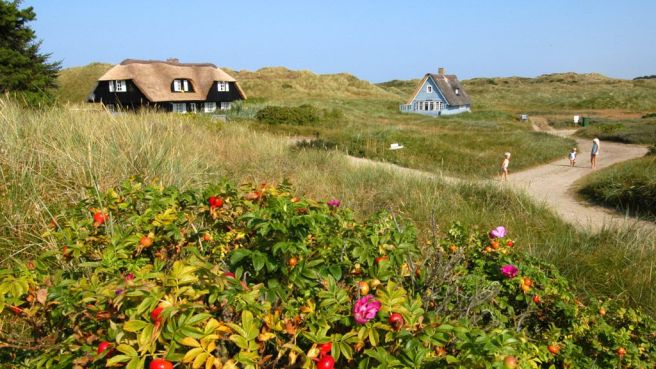 I don’t know if it’s because it’s so elusive and long-awaited, but the summer in Denmark is a special kind of magic. The air smells like the rambling rose bushes which erupt everywhere in hot pink and crimson during the warmer months. People sit on the harbour wall drinking elderberry cider while ancient wooden ships creak out a ditty of their mysteries. At 10pm the sun is still visible on the horizon. Bonfires are lit on the beach. Children run into the warm ocean, forests become impenetrable walls of bright, lush green. All the nation celebrates  with wine and strawberries and buttery new potatoes. People eat hotdogs with remoulade and dill-flavoured crisps. Music concerts spring up everywhere and nobody wants to go to bed. These hot nights are too delicious to waste. These long days are for savouring and for seduction. Most of the time Denmark is cold and flat and grey. But from June till September she’s tanned, blonde and very, very sexy. Visit her then and you’re sure to fall in love.

31 thoughts on “Things I Fucking Love About Denmark”